Adapted to the particularities of each valley, the farms also recount their history across landscapes. They remind us of the major role mountain agriculture used to play, and still plays today. They also attract many tourists as they represent our territory.

Towering above the front doors of farms built or refurbished in the early nineteenth century, one can still see pink sandstone monuments engraved with religious quotes in Latin or French: “May God bless this house”, and other religious or decorative symbols. The monuments are also carved with recesses. Straight lintels, or curved for the most ancient ones, display the initials of the resident man and wife as well as their trades, the date the farm was built, the stonecutter’s name, and sometimes even geometric patterns. The housing, spanning across two levels, was very vast and clearly removed from the barn and stables by a corridor crossing the entire house. The great double door enabled the farmer to store cumbersome equipment.

Dispersed farms with specific architecture are typical of Welche landscapes. Fields, orchards, vegetable gardens are located around the farm where each is “Master of his own Homestead”. The Welche farm is characterized by its rectangular architecture in one piece. Men and livestock resided under the same roof to shield from harsh winters and bad weather. Close to the road, it adapts to the ground and often follows land contours, hence the varying orientations. At the back, a bridge gives access to the attic. A source – vital for both men and animals – can always be found nearby. Tiles replaced thatched roofs in the early twentieth century. Beautiful tiled roofs appeared during the reconstruction of buildings that had been destroyed by World War One.

The (nearly) square farm houses men, equipment and animals under a large protecting roof. Isolated farms dot high cleared lands on hillsides. Their imposing roofs are slightly tilted to retain snow for insulation. The bread oven can be clearly seen from outside. The house counts three spans: the dwelling (south-east), the barn and the stable. The front walls are usually covered with lime plaster coloured with local sand. They are bedecked with wood on the gables, or with “essis”, wooden boards that can also be seen on the most exposed façade and under the tiled roofs.

Small summer farms half-way up pasture lands or on high stubble, the marcairies used to shelter the Marcaire and his cattle from May until September. He used to make Munster or Géromé Cheese. Marcairies are long, low, single-storey houses. They nestle in land recesses to seek shelter from the winds. The roughly carved stone walls are thick, to shield from harsh weathers, and small openings prevent the heat from escaping. The most-exposed façades are covered in claddings or slates. To begin with, the Marcaire’s house was very basic, as it was mainly used to make cheese. The Marcairies destroyed during WWI were replaced by larger farmhouse-inns, where the main room opened onto the landscape while the stable widened. Nowadays, the “inn” part is prominent, in keeping with traditional farm hospitality, to complete the pastoral activities typical of the Hautes-Vosges region.

They comprise several buildings with clearly defined functions arranged around the yard. The farm, the bread oven, the fountain, the woodshed and the chalot stand alongside the still, the forging workshop and the pigsty. The roof is covered in lava sandstone, of which the doorframe is also made. Furniture was traditionally made in cherry-wood from the household’s orchard. The chalot, true “safe”, was manufactured until World War Two. This annex to Meridional and Saonoise Vosges farms was used to store grain, fruit, meat products, alcohol and other prized family possessions. This construction can be entirely disassembled; it is made of interlocked wood: mortises and tenon joints, without the need for glue, nails or screws. It is covered in lava sandstone.

Saonoise Farms and their “Charri”

In the Saonoise Vosges, the dispersed farms were built as near as possible to the pasture meadows. They are rather small and made of local materials. Door and window frames are made in sandstone. Framework and cladding are in wood. Often small, they are characterized by a porch fronting the central barn, large enough to shelter a carriage. Men and animal accommodations are located on each side of this “charri”. 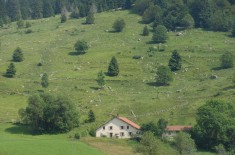 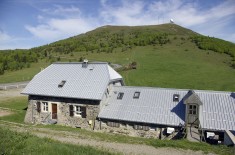 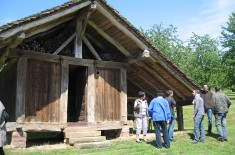