Colomban is a historical player in the Massif. This Irish Benedictine monk, raised in true Irish tradition, settled with 12 other monks at the foot of the Vosges Mountains in 590, first in the Valley of Breuchin; then, he went on to open two monastic cells in the Haute-Saône, in Luxeuil and Fontaine-les-Luxeuil. His disciples spread his word from South to North, and in turn established many monasteries supported by local aristocracy: Munster, Remiremont and Saint-Dié des Vosges, Lure, Murbach… lack of precision in the founding texts gradually enabled the aristocracy to take control. Vosgian valleys open to abbeys, yet controlled by secular benefactors and crisscrossed by villages and farms, prospered during several centuries. This territorial division even led to the establishment of counties in the aftermath of the French Revolution. The rupture occurred in the sixteenth century when the Alsatian nobility adopted the Reform while the Duché of Lorraine led the Catholic Counter-Reform. Even though many of these abbeys have today disappeared, religious places of interest displaying Roman, Gothic, Baroque or modern architectures can be visited, among which: Luxeuil-les-Bains, Saint-Colomban cloister and abbey, Saint-Colomban grotto and chapel in Sainte-Marie-en-Chanois, Saint-Valbert Hermitage, Abbey ruins in Munster, Murbach Abbey, Dominicains Convent, Saint Léger Church in Guebwiller, Saint Michel and Saint Gangolfe Collegiate in Lautenbach, Saint-Etienne Roman Church in Osenbach, Gueberschwihr Church, Hunawihr Church and Fortified Cemetary, Saint-Thiébaut Gothic Collegiate in Thann, Notre-Dame de Thierenbach Baroque Basilica in Jungholtz, Bertrimoutier and Provenchères-sur-Fave Churches with “bulb” bell-tower from the eighteenth century, Churches with Comtois steeples and varnished tiles in Faucogney, notably mountain chapels: Frère Joseph Hermitage in Ventron, Rudlin Chapel, Saint-Marc du Chipal Chapel in La Croix-aux-Mines… Notre-Dame du Haut Chapel by Le Corbusier in Ronchamp. But also the Saint-Pierre Chapel on the Hâte in Sainte-Maire-aux-Mines, the Reform temple in Sainte-Marie-aux-Mines, etc. 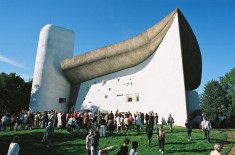 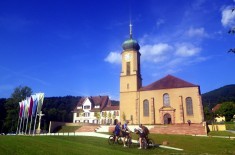 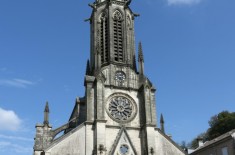 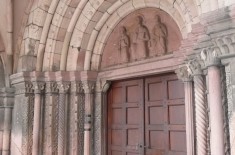