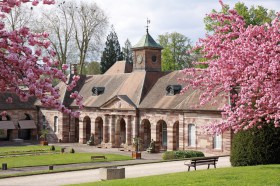 The visit of Luxeuil-les-Bains by Napoléon III and the Empress Eugénie in 1856 helped relaunch the Luxeuil resort, which soon became popular. In the early twentieth century, many celebrities were often spotted there – such as Sacha Guitry or Yvonne Printemps. The place was famous for its elegance and for its park. Many great hotels (Hôtel des Thermes, Métropole, du Parc, des Sources, etc.) were built, as well as villas. They further embellished a city that already boasted classical pink Vosgian sandstone architecture, built under the reign of Louis XV.

The Luxeuil waters are of two sorts: warm waters (hyperthermal sources, reaching up to 63 °C for the Boursaux Spring) and cold waters (oligo-metallic, with low mineral content, and highly radioactive). The Luxeuil health cures are currently recommended, especially for gynaecological and rhumatismal ailments. 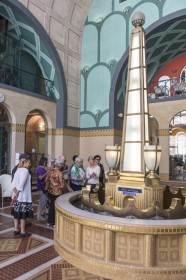 The Plombières-les-Bains city and landscape testify to two thousand years of thermalism. Many politicians and artists have visited the city since the eighteenth century. Napoléon 1er nationalized part of the springs in the early nineteenth century, but it was Napoléon III who created the company to exploit them. He ordered the construction of a third building, the Napoléon Baths, thereby updating Roman vestiges: original pipelines and stone tiers can be admired in the Roman Baths. He also created the Casino and the Park Tivoli in Plombières. The city counts 27 warm springs that are low in mineral content and rich in oligo-elements. The Plombières Springs gush at temperatures between 57 and 84 degrees Celsius: ideal for relaxation, they are also indicated for the treatment of digestive and rhumatismal conditions.