The Ballons des Vosges Park is dedicated to promoting short tours as well as local produce and craftsmanship.

This sandstone does not characterize a volcanic rock, but rather a stone that split naturally into thin sheets, and is used as roof covering. Its use is specific to the Vosges Saônoises regions and the Vôge. It originates from the top layers of a particular sandstone: the Voltzia sandstone, found on plateau summits. In the Vosges saônoises, the lava sandstone is an architectural and cultural feature. It covers up to half of the roofs in some hamlets – these roofs can be seen in around fifty villages. Lava sandstone also covers chalots – small wood constructions located near farms and used as safes or granaries. The technique used to cover roofs with lava sandstone is simple and requires little equipment (hammer/template/drill). Such apparent facility must however be completed with the “expert eye” or “know-how” of sandstone lava fitters. Acquiring this craftsmanship involves extended practice time, and is only accessible to a few artisans. Four companies continue this craft today, using environment-friendly materials – as the skills involved in the extraction process totally disappeared. 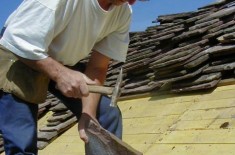