The Park Forests are arranged mostly according to climate: leafy forests along foothills, pine and beech forests on slopes, and leafy forests overhung by beeches on summits dominated by subalpine climate.

Along foothills, milder weather conditions and deep soils allow the leafy forest to spread over vast wooded stretches. Beeches thrive on the western slope, thanks to heavy rains throughout. Sessile oaks find shelter in the drier Alsatian side, and are particularly fond of southern slopes. They settle with scots pines on poorer soils, in particular on the rare sandstone areas as in the Taennchel Massif or wherever foresters planted them.

Between 500 and 1,000 meters in altitude, the wet and cool climate favours a ring of beech and pine forests. It forms the Park’s biological reservoir, with mountain mammals or prestigious species such as lynxes, capercaillies, red deer, martens and recently wolves. Old forests shelter a great biodiversity thanks to dead wood: mosses, mushrooms, lichens, insects, birds… this natural and biodiverse haven welcomes the rare owl of Tengmalm or again the highest peak in Europe: the Pic Noir. The forest clears above 1,100 meters, with beech woods and sometimes high stubbles or peatlands, and can welcome capercaillies or chamois.

Above 1,100 meters, needle-covered pine trees – more sensitive to winds and freezing fogs – dwindle in favour of leafy trees such as beeches, rowan-trees and maple trees. Weather conditions on summits hinder natural tree regeneration. As a result, they remain small with knotty, gnarled trunks. The forest remains quite clear here; therefore, many animals such as the capercaillie or the chamois come for food, but they don’t remain there all year long. Soil ecological conditions (mineralogical richness, acidity, dampness) stabilize the forest flora in places. We can find maple and spruce groves or forests by riverbanks.

Here more than elsewhere, the soils select and impose a species specialisation. The best-exposed scree slopes include maple trees as well as mountain elms, ash trees and sometimes lime trees. Shaded by their crowns, a wide variety of shrubs and ferns – such as the rare hart’s tongue – take advantage of soil richness and humus. Block instability hinders beech and pine tree development. Hard to exploit, these forests remained wild.

Even though spruces were largely planted within beech and pine groves, a few rare cold valley bottoms on rocky blocks or peat soils are today considered as the Vosges Mountains’ spruce cradle. These also are living environments for a few rare species such as the pygmy owl. The spruce is a pioneer species which grows easily on sites abandoned by farmers, on uprooted-tree areas and even in subalpine beechwoods. Pure spruces are rather hostile to biodiversity and particularly the large fauna. Excessive amounts of game also favour natural spruce renewal to the detriment of pine trees or other more appealing species.

These are true narrow forest galleries edging up along hilly streams. Comprising ash trees, sometimes willow trees at low altitudes, or alders, and located at a crossroads between land and water, these alluvial forests enjoy a wide biological diversity with great ecological value: bank fixation and water purification in particular, sanctuaries for varied species such as white-clawed crayfish, water shrews or polecats. 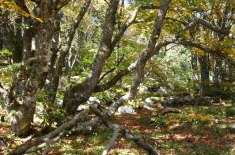 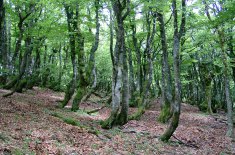 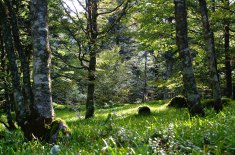 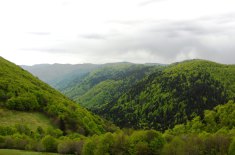