Because of the collapse of the Rhine Graben, the Alsatian Vosges Mountainside was strongly eroded during the last ice age. Therefore, a granite wall towers above 900 meters – which impeded many colons in the valleys. This natural obstacle combined with extreme climatic conditions on the peaks forced many dwellings to remain along the medium-altitude sunny slopes.

The crest wall is indented with sharp and rocky glacial cirques. Western winds repelled the snow eastwards to the foot of the crests, where it accumulated to form deep basins. Agricultural work was geared toward milk production. Meadows and pasture lands sprinkled with fruit trees, in vicinity of farms and villages, dominate largely on the low and medium altitude slopes. Higher, old stubble often gave way to uniform resinous tree plantations. The forest only recovers a natural aspect nearer the summits or along the sharp slopes. The high Alsatian valleys starting from Masevaux, Thann, Guebwiller, Munster, Kaysersberg, Ribeauvillé and Sainte-Marie-aux-Mines are very much contrasted. Languages, cultures, landscapes, the economy and even the art-de-vivre vary. To such an extent that in Val d’Orbey – one of the oldest passage points between Alsace and Lorraine along with the Col du Bonhomme – the spoken tongue is a Roman dialect. Whatever their culture or their situation, these valleys are increasingly inhabited by people who, very often, work in big cities nearby. Since the Seventies, this context has led to the valleys’ urbanization. The Park now works alongside neighbouring towns to optimize this rural urbanization with a high landscape impact. 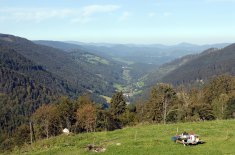 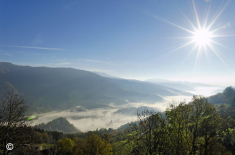 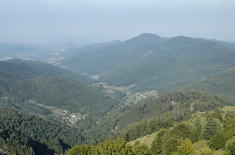 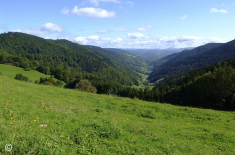