The Ballons des Vosges Regional Natural Park houses several reception areas to communicate with inhabitants and visitors alike, to raise their awareness, and to be understood by them. These are wonderful dynamic and open starting points to explore the Southern Vosges Mountains. They provide specific documentation and propose assorted temporary exhibitions.

The Château-Lambert hamlet located in the small Haut-du-Them village – in the Haute-Saône region – houses the Nature and Culture Area created by the Haute-Saône General Council in the summer 2009. This building houses offices for the Vosges Saônoises Nature House, the Franche-Comté Ballons Nature Reserve and the Ballons des Vosges Regional Natural Park. Open all year and admission-free, it dedicates 250 m2 to welcoming visitors. A permanent exhibition presents the natural and cultural wealth of the Vosges Saônoises. A shop and a children’s reading corner complete the visit.

High Environmental Quality in the Nature and Culture Area 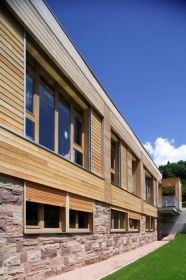 The Château-Lambert village is renowned for its architectural and landscape heritage. The building depicted here takes this into account, and meets the following architectural objectives:
• landscape integration of the building,
• use of renewable materials,
• management cost optimization
• comfort for dwellers and visitors.
Thus the building takes three High Environmental Quality (HEQ) aspects into account: eco-construction, eco-management and comfort. As you progress along the Nature and Culture Area, you will see the six HEQ targets displayed on a series of explanatory panels:
– the relationship between the building and its environment
– the choice of products and construction processes
– energy management
– water management
– hygrometric comfort
– visual comfort

closed in January, February and December

< Back to the Park Houses homepage

Things to Do in the Area

< Back to the Park Houses Homepage